Since moving to DC, I’ve rediscovered my love of baseball. For the past two seasons I’ve gone to 3-4 games and as of a week ago, have been able to go to two this season. At each game I inevitably end up bemoaning the fact that I stopped playing softball as a 6th grader. Such is the way of life I guess. 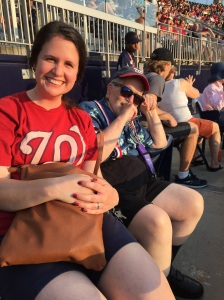 In mid-May I had gone to a Nats vs. Orioles game that was spectacular and really fun to watch. We were down throughout the majority of the game but came back to win it in the 9th. I had been pretty sure that it was going to be my only game this year since I’m leaving DC and could see how busy my calendar was getting between May and my “move date.” Fortunately for me, my friends Michael & Savannah invited me to join them for a game and I had enough space in my calendar to be able to say yes!

So on June 12th, we “jumped” into the van and headed to Nationals Stadium to see the Washington Nationals face off against the Atlanta Braves. While we were there, I was particularly impressed by the stadium staff we encountered throughout our evening. Now, I tend not to have strong feelings about the hiring choices made by an organization/ restaurant/venue/etc unless I have a pretty bad experience, so I think that the fact that this is what stands out to me about the game is relatively significant. And honestly I hadn’t paid too much attention to the staff at Nationals Stadium previous to this, so maybe this is just a normal day at the ball game for them. But I was blown away. I was particularly impressed by the inclusive hiring practices I noticed, (I even got break out some of my rusty ASL!) and left the game feeling so thankful for the staff members we had encountered throughout our evening. One gentleman in particular (whose name I won’t include here) helped us get to our seats and then kept an eye out for us at the end of the game to make sure we got where we needed to go. 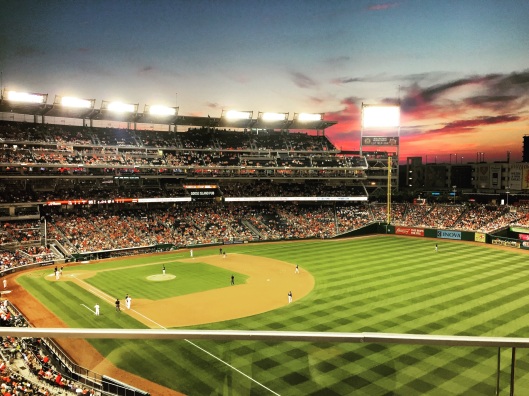 While the Nats fell short in the end, it was definitely a lively game. In fact Savannah left at the top of the 9th to get the van so we could make a quicker escape thinking that the Nats were going to win it (9-8 Nats at the time)! But then the Braves got a home run with two on base (bringing the score to 11-9 Braves), after which I turned to Michael and said, “Mike, I just don’t know if we can do it.” And it was true, the Nats just weren’t able to come back and win it. Michael spent the whole ride home telling Savannah about the excitement of the inning she had missed and commenting on what he thought had led to the Nat’s loss (All about those “no good” relief pitchers and dropped balls).

What an amazing way to go. Nats – thanks for being my team these past few years. I’ll be seeing you when you come play the Rockies in Denver.

This is an older photo (because I somehow failed to get a new one during my last visit) but I’m super grateful to have this beautiful lady as my mama, and especially grateful to have been able to give her a REAL HUG in the last month. And when real hugs aren’t an option, I’m grateful for our calls while I’m driving home from work, and when I’m having an especially good or bad day. You’re my favorite.
This handsome puppers got a bit lost today but was fortunately able to find his way over to #BalfourRiverfrontPark where he got lots of love and pets while Balfour staff worked to reunite him with his missing human
Love being on this team and especially love the days we get to show off our party skills. #HappyCincoDeMayo #ElvisGoesToMexico #ElVelvetElvis @balfourseniorliving #LifeEnrichment
Flowers, flowers, flowers…
We had a busy weekend, planting flowers, and deep cleaning a grill left behind by a former roommate… #WishingForWarmWeather
Happy 43rd Anfrew, this one’s for you #HappyRottenBirthday #MissYou
My heart is so full... #Friendship
My friend and brother-in-L’Arche, Andrew, passed away this morning. In 2015, Andrew was one of the core members at @larche_gwdc that welcomed me into Euclid House and invited me to be part of the L’Arche family. Andrew always made sure I got to meet and shake hands with everyone who entered L’Arche’s door and was the first person who met and introduced my parents and brother to my life at L’Arche. When I officially moved to DC to be a part of L’Arche after my initial internship ended, Andrew welcomed me with enthusiastic air hugs upon seeing me across the street, and never stopped sharing his love, welcoming spirit, and joyful enthusiasm in all of the time I spent living in DC. Andrew will be deeply missed and forever loved. #GoodbyeDearFriend #LarcheFamily
Nectar feeding at the @denverzoo yesterday was so much fun! Definitely one of the best ways to enjoy the beautiful Colorado weather! #DenverZoo #BirdFeeding #OutsideFun #Lorikeets
In the first week of October, residents helped us peel lemons and fill jars to infuse vodka... today we strained the infusing mixture, added simple syrup, and served our house-made limoncello at Happy Hour!!! #SixMonthsInTheMaking #Yum #SweetTasteofItaly #limoncello🍋 #LifeEnrichment #BalfourRiverfrontPark
A very Happy Easter Happy Hour here at #BalfourRiverfrontPark not pictured, the 720 Easter eggs I hid around the building for residents and their grandchildren to find #EasterEggHunt #LifeEnrichment #HappyHour
When spring weather is here on a Saturday, you have to play in the backyard and make all the neighbor dogs jealous... #TennisBallsAreTheBest #MagasourusRex
Some days, I come home to find unexpected things... #WhenYourRoommateIsMakingTheUltimateKoreanStock
It was a great St. Patrick’s Day celebration at #BalfourRiverfrontPark today with dancers from @wickirishdance !!! #happystpatricksday #LifeEnrichment @balfourseniorliving
A few more glimpse’s into tonight’s festivities... Events like these are part of why I love my job ♥️